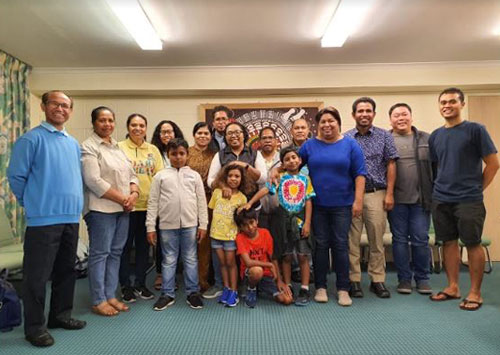 If it goes ahead, it would be the second Lay Mission Partners group in the AUS Province, with one already having been formed at Marsfield in Sydney.

Justin Laba Wejak, a former SVD seminarian and friend of the Divine Word Missionaries wrote a report on the meeting saying that those who attended the meeting, held at Dorish Maru College in Box Hill, were keen to explore the concept further.

“Even though ideas surrounding the formation of this group remain to be explored further, the attendees enthusiastically welcomed the initiative.

“It was suggested that a poster should be designed containing a brief explanation of the vision and mission of the SVD Lay Mission Partners for public announcement and recruitment of membership.”

Justin said the question of rationale for such a group was important as a lay group comprised of former SVDs and their families already exists in Melbourne, and that group has been proactive in the shared mission of humanity over a number of years.

Br Martin acknowledged the ongoing existence and activities of the Lay Melbourne group and encouraged the group to become the core group for the SVD Lay Mission Partners in Melbourne.

The participants at the meeting agreed to hold the next meeting at the Janssen Spirituality Centre in Boronia on Sunday, May 20.

“It is hoped that in the next meeting, the ideas surrounding SVD Lay Mission Partners will be discussed further to gain clarity, particularly in terms of vision, mission and programs that would help deepen a sense of SVD spirituality, individually and collectively,” Justin said.

The SVD AUS Province, has, under the guidance of the Holy Spirit, been exploring the formalising of Lay Mission Partner groups in the Province for some years now.