Fr Toub keeps busy at home with acts of service 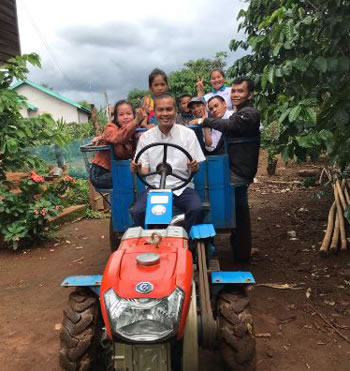 When Fr Toub Anisong Chanthavong SVD took the short trip from Thailand to Laos in December for three months of home leave with his family, it never occurred to him that a worldwide pandemic would prevent him from returning to his ministry for many months.

Toub had been set to take up a new parish assignment as assistant priest in Ban Phongsoung, Thailand upon his return from home leave, but instead, has been keeping himself busy in various forms of ministry and service in Laos.

“I came to Laos for home leave in December last year and planned to stay at home for three months while also waiting for a working visa in Thailand,” he says. “And then everything changed. The virus broke out and the borders were closed.”

Toub, who is the SVD’s first priest to come from Laos, had a little money with him, from the time of his ordination in Australia last year and shared it with a local widow by building a new shelter for her to sleep in after her husband passed away.

“The poor helps the poorest,” he says.

“I also conducted retreats for the seminarians and the sisters here and I’ve been looking for donors to donate rice to the poor communities during the pandemic. 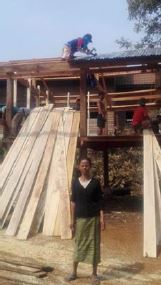 “It keeps me busy and I feel rewarded.”

Even though Laos has comparatively few cases of COVID-19, Toub says he has no idea when the borders will open or his working visa will arrive and so he continues to keep busy while he waits.

“The virus itself is bad and no-one wants to be infected by it,” he says. “However, this has been a time for humans to reflect about the will of God.

“Above all, we have to acknowledge that God is good all the time and God has a perfect plan for humanity.”

Above Right: Fr Toub with locals in his home country of Laos, while he waits for Thailand's borders to reopen following the pandemic. Left: Fr Toub used his time in Laos to build a shelter for a local widow.