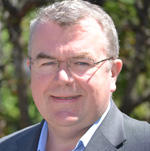 Fr Henry Adler SVD has been appointed as the Provincial-Elect of the Australian Province of the Divine Word Missionaries.

Fr Henry, who is currently the Mission Secretary for the Province, will take up his three-year term as Provincial in January.

Outgoing Provincial, Fr Tim Norton SVD, said Fr Henry was elected to the position in a vote of his provincial confreres and the appointment was formally approved by the SVD Generalate in Rome.

“This is wonderful news for the Australian Province and we receive it joyfully,” Fr Tim said.

“I’m sure everyone joins with me in congratulating Henry and wishing him every blessing for the future.”

Fr Henry grew up with both German and Polish cultures in post-war Poland, and after joining the Society of the Divine Word, completed his initial formation in Poland and Germany, taking his final vows as a brother. He worked for some years in Germany and Papua New Guinea, before undertaking his priestly formation in Melbourne and being ordained in New Zealand. Fr Henry then returned to Papua New Guinea for five years, before coming back to Australia to work, first in formation of SVD seminarians, and then as Mission Secretary for the Province.

Receiving the news of his appointment while he was in Europe on home-leave, Fr Henry said it would be a privilege to lead the AUS Province, with God’s help and the support of confreres.

“I am deeply grateful and humbled by the trust and confidence that my AUS confreres have bestowed on me,” he said.

“I am also very grateful for the kind support and prayers I have received from people.”