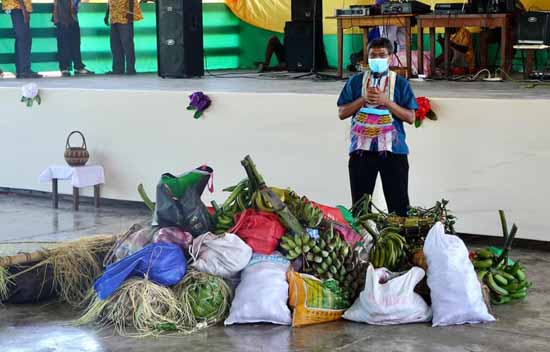 The Divine Word Missionaries this month celebrated 125 years in Papua New Guinea with a range of celebrations, giving thanks to God for all the blessings bestowed on the mission, the people, and the missionaries themselves.

SVD Superior-General, Fr Paul Budi Kleden, was special guest at the celebrations, having made it all the way from Rome, despite the COVID-related difficulties in international travel.

The Divine Word Missionaries’ presence in PNG was approved by the founder of the Society, St Arnold Janssen.

On May 29, 1895, Fr Janssen received an official inquiry from Cardinal M. Ledochowski. The Cardinal asked Fr Janssen whether his Society would be prepared to take on a new mission in German New Guinea.

The Society of the Divine Word, founded in 1875 in Steyl/Netherlands, already had missionaries working in China/Asia (since 1879), in Argentina/Latin America (since 1889), and in Togo/Africa (since 1892). Thus, the Society had already gathered field experience on three continents.

In 1892 when missionaries took up their work in Togo, a German colony at that time, it was the first time that members of the Society had worked within a German colony. Thus, for the administration of Propaganda Fide this fact seemed reason enough to consult the Society when looking for new missionaries for German New Guinea. There was practically no other Society which could better meet the requirements with regard to staff and experience. 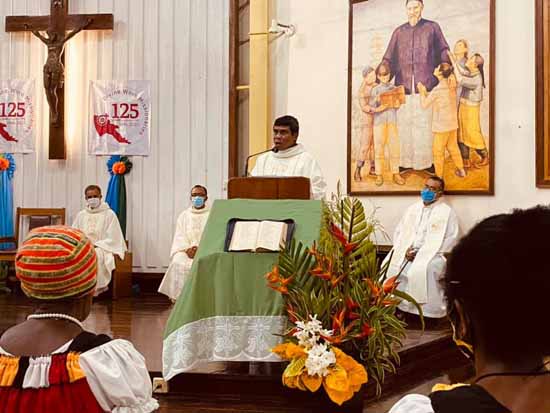 This invitation for taking up missionary work in North-East New Guinea was a rather urgent call from Rome. It arrived in Steyl May 31, 1895. One day later, the Saturday before Pentecost, the General Assembly of the Society with Fr Janssen as chairman, decided to accept the mission. Fr Janssen gave his written consent June 5, 1895, the feast of St Boniface, the great missionary: "It is impossible for us to reject your application for in your decree we see God's will'.”

On June 6, 1895, Fr Janssen presented to Propaganda Fide in Rome 37-year-old Fr Eberhard Limbrock as a candidate for the position of Prefect to Kaiser Wilhelmsland. Fr Limbrock was a missionary in China at that time. Rome approved the suggestion on June 26, 1895 and Fr Limbrock gave his affirmative answer on November 23, 1895, writing: “Trusting completely in abundant graces from on high and in your support through prayer and good advice, etc, I consent and I am ready”.

Led by Fr Limbrock, the SVD missionaries first set foot on New Guinea at Madang and then settled in Tumleo Island. After six months in Tumleo, the missionaries established the “Queen of Angels” station among the Walman People living on the opposite side on the mainland of Tumleo.

They opened the first school in July 1897 and from 1900 to 1914 they established a series of mission stations along the North Coast of Madang. In 1906 the Holy Spirit Sisters, also founded by St Arnold Janssen, arrived in New Guinea. 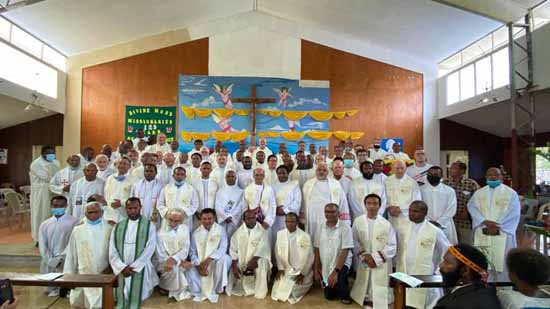 From 1911-1942 more stations were established bringing the works of the mission to the side of Bogia. The early missionaries did not only preach the Word of God, but instead they focused on improving the community life. Giving basic services like schools, health centres, teaching crafts like carpentry and livelihood, etc.

Today the SVD Missionaries are serving in seven dioceses across PNG. There are two active bishops; Archbishop Douglas Young of Mt Hagen and Bishop Jozef Roszynski of Wewak. Archbishop William Kurtz has retired in Madang. There are 68 priests, 12 religious brothers and 22 seminarians preparing for priesthood in various stages of formation in the country. The SVDs in PNG have sent 18 PNG national priests and brothers on mission to 12 different countries.

The SVD are a significant presence in PNG and are involved in parish ministry, healthcare, education, communications and a range of other ministries.

Celebrations of 125 years in PNG started back in January with a Mass celebrated by Archbishop Douglas Young in Mt Hagen.

Archbishop Young described it as big day for Catholics to look back on and celebrate the church’s history and origins in the country.

He told The National newspaper that knowing the history of the Catholic church in PNG would give Catholics an appreciation for early missionaries and honour their work.

Archbishop Young said the celebration was a time to thank God for what he did to help the nation and its people through the efforts of the SVD missionaries. 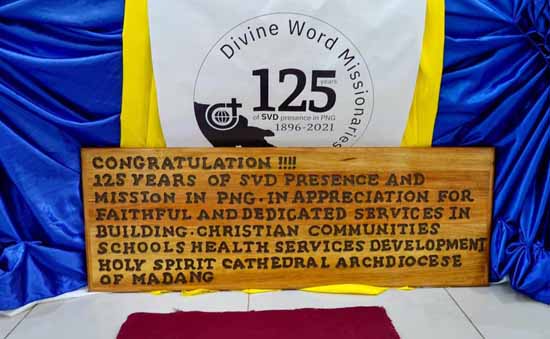 He said the early SVD missionaries had contributed to educating Papua New Guineans and converting many to Christianity.

“As we come to celebrate this event, we come to know and acknowledge what the SVD missionaries have done to help us live a life where we are living today,” he said.

“We are here today to realise and recognise how SVD played its part to bring light, hope and life to the people.”

The celebrations continued this month with the arrival of the Superior-General, Fr Budi Kleden. He was welcomed in Madang by the SVD community led by Provincial Fr Jose Orathinkal SVD. The people of Malmal Community- an outstation of Alexishafen presented a ‘singsing’.

The Jubilee Mass was held on August 6 in the Cathedral in Madang, to commemorate the first landing of the SVD in Madang in 1896, with Fr Budi presiding.

Celebrations continued throughout the Province Assembly which followed.

MIDDLE RIGHT: A group photo of SVD Missionaries in PNG following the Jubilee Mass in Madang.

BOTTOM LEFT: A plaque of appreciation from the people for the presence of the Divine Word Missionaries in PNG.