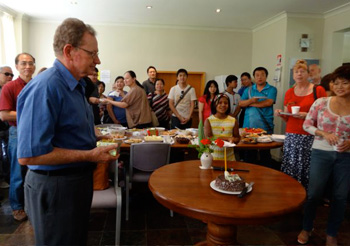 Fr Mike Knight SVD says he was determined not to cry when the community of the St Arnold Janssen Chapel in Marsfield farewelled him in early December, but the tears crept up on him anyway.

Up to 180 people gathered for Sunday Eucharist at the Chapel, followed by the blessing of the new “The Word Centre”, and the farewell gathering for Fr Mike, who is finishing his term as Rector of the SVD Marsfield community.

“Straight after Mass, where Fr Tim Norton officiated, we had the blessing of our new multipurpose centre, which we have named ‘The Word Centre’ (photo below). The centre will house the Biblical Apostolate as well as an SVD Spirituality Centre.

“And then the people brought out a cake as a farewell for me, and one of the parishioners made a speech in my favour.

“I must admit I cried. I hadn’t expected to and I didn’t want to, but I did anyway.” 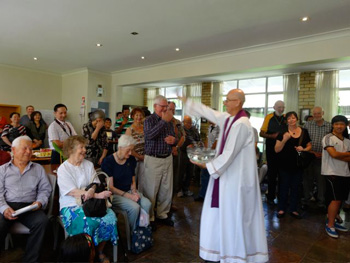 Fr Mike is leaving Marsfield to take up the role of Parish Priest at Sacred Heart Parish, Preston in Melbourne. He has finished his three year term as Rector of the Marsfield Community.

“I’m excited about moving on, but also sad to be leaving the people here,” he says. “Moving interstate, you don’t know when you’ll see each other again, so it’s bittersweet.

“I’m looking forward to being back in a parish again, but it will be hard to leave here.”

Fr Bill Burt, the current Parish Priest at Sacred Heart, Preston, (pictured below) is taking up an appointment in Indonesia, where he will be joining the community at the Seminary at Ledalero on the island of Flores.

“I’ll be taking on a role of mentoring young priests who are preparing for overseas placements,” Fr Bill says.

“It will be about assisting them with their cultural awareness program and English language program. 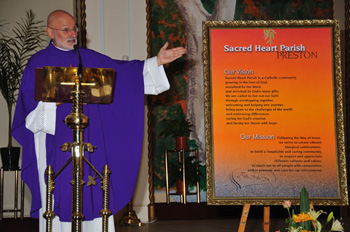 Fr Bill says he too is sad to be leaving his parish community at Preston.

“I’ve had a very happy six years in Preston,” he says. “It’s a small but lively parish and I’ll certainly leave there with very many happy memories.

“I’m sure the people will give Fr Mike a very warm welcome as they did to me six years ago.”