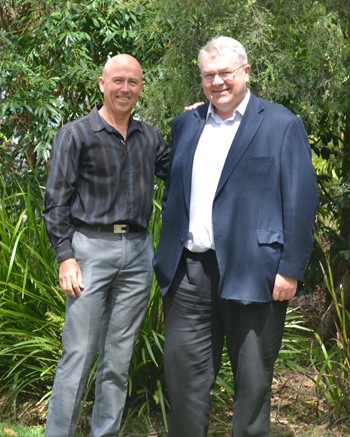 The new Provincial Superior of the SVD AUS Province, Fr Henry Adler SVD says that as he begins his new ministry of leadership, he is motivated by the example of his predecessor, Fr Tim Norton SVD, whose “passion for mission and service to the poor and less fortunate has been inspiring and contagious”.

Fr Henry, pictured right, who was previously Mission Secretary for the Province, was elected to the position by his confreres, with the SVD Generalate confirming the appointment in August. The appointment is for a three year term, which began on January 1.

“I am both honoured and humbled to be chosen to serve my SVD confreres as the new Provincial of the Australia Province, as together we strive to serve the people of God,” Fr Henry says.

“The AUS Province has been blessed to have had Tim Norton as the Provincial Leader for the past nine years. Tim holds a vision of a Church that is all inclusive; a multicultural community of people living and radiating hope, love and equality. This kind of vision of the Church is attractive and therefore inspires others to be passionate about it too.

“As the Provincial, I would like to build on the rich legacy left by my predecessor, but would also be open to the guidance of the Holy Spirit beyond this legacy. I’m looking forward to working with my newly elected and very capable Provincial Council to continue our mission here in Australia, New Zealand and Thailand, and beyond the Australia Province.

“I am also looking forward to collaborating with our many partners in mission; our friends and benefactors who faithfully support us in our mission.”

After nine years as Provincial, Fr Tim, pictured above left, is taking some well-earned leave before embarking on his new missionary assignment in March.

He has been assigned to be the Director of the Ad Gentes Centre in Rome.

“It’s been a long term mission of the Society to hold renewal and sabbatical programs for members and I’m looking forward to being a part of that ministry,” he says.

“Essentially my role will be about providing people with the opportunity to renew themselves for Mission and I understand that role itself to be Mission.”

Fr Tim says he is also looking forward to brushing up on his computer skills and re-learning the piano.

“I’m leaving the Province in very good hands,” he says. “The Province has chosen well in Henry and he will approach things in his own way, which is different, but complementary to my approach. It will be a good change.”

Fr Tim says he is pleased with the diversity of SVD ministry in the Province, and the ways in which the Society is assisting the local Church in dioceses with particular missionary challenges.

“Our initial formation program continues to thrive and the ministry in Thailand is moving forward, with our ministries to the poor and marginalised continuing to develop, especially to people with HIV AIDS. The Province has grown in number and diversity, both ethnically and personality wise, which is great. There are challenges, but the Province is, I think, well placed to meet them.”

Looking to the future, Fr Henry says the Province will continue to give witness to its missionary charism through living in international/multicultural fraternal communities.

“From this experience we reach out to the poor and marginalised, to faith seekers and to people of varied faiths and cultures. We do this with a desire to discern the will of God in a spirit of prophetic dialogue.”

Fr Henry, who grew up with both German and Polish cultures in post-war Poland, is the first non-Australian born Provincial of the AUS Province. After joining the Society of the Divine Word his vocation quickly led him to the other side of the world. He completed his formation in Melbourne, was ordained in New Zealand and then worked in Papua New Guinea for seven years, before coming back to Australia to work, first in formation of SVD seminarians and most recently as the Mission Secretary.

This story first appeared in the latest edition of the SVD AUS Province mission journal 'Society Matters'. You can subscribe to receive 'Society Matters' in the mail by contacting the office on 02 9868 266 or This email address is being protected from spambots. You need JavaScript enabled to view it., or check out the new flip-book version on our website here.