Toub "ready" for challenges as he enters novitiate 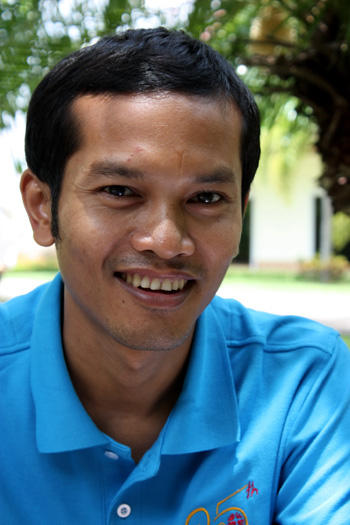 The SVD AUS Province’s first postulant from Laos, Chanthavong Anisong (Toub), is set to enter the Novitiate this month, in an important step forward for his vocation.

Toub, 33, has been living with the SVDs in Nong Bua Lamphu in Thailand, which is a part of the AUS Province, and will undertake his Novitiate in the Philippines.

He says he is looking forward to entering further into formation to become a Divine Word Missionary.

“My novice programs will begin at the end of May,” he says. “And this year, in the Philippines, there are no novices from PNG. I am the only one from overseas, so this will be a challenge for me. But I am ready to cope with it and to learn more about living in community life so that I will be better prepared for my future missionary life.”

Toub was born in the Laotian countryside and grew up in a small village. His parents are farmers who work in the rice fields and he has five sisters.

“My family became Catholic once the missionaries from France arrived,” he says.

“I finished secondary school in my district and every morning I studied catechism with a religious sister from 6am to 7am. I went to Church every Sunday and enjoyed catching up with all my friends around the Church.”

Toub says he first thought about a priestly vocation after his first Communion when a new priest was assigned to his parish.

“I was attracted to what he did and his lifestyle, so the idea of becoming a priest arose,” he says.

“I was always active in the Church. I was a lector, an altar server and just involved in all kinds of things in my parish. I was 18 years old when I left home to access better education. Together with some friends we lived next to a rectory.

“After finishing high school, I wanted to join the seminary, yet the priest advised me to do something different before joining.

“So, out of 300 people, I was one of the 10 chosen to study English at a teachers’ college. After three years training, I entered the seminary, since there was still a longing to become a priest.”

Toub found out about the Divine Word Missionaries through a friend who had met some SVDs in the Philippines.

“He spoke in such a lively way about his experience, and that’s the first time I heard about the congregation. After I finished Philosophy in our major seminary I went back to my diocese where I worked in pastoral care, taught catechism and set up all kinds of Church activities.”

Later, when he was seriously considering pursuing religious life, he recalled the SVDs and Googled them before contacting the former Vocations Director, Fr Viet Ngyuen SVD and later meeting Fr Truc Quoc Phan SVD, who was working in Thailand.

Toub was accepted as a postulant and lived with the SVDs in Nong Bua Lamphu for the past year, helping out with their various ministries there, which include both parish ministry and ministry with the Our Mother of Perpetual Help AIDS Centre and Ban Marie Children’s Home for children orphaned by AIDS.

After being accepted for the Noviate, Toub has spent the last several weeks in the Philippines, preparing to enter the Novitiate there.

“When I first arrived in the Philippines, the Provincial here gave me the opportunity to visit and experience the first SVD Mission in the northern Philippines,” he says.

"I saw the results of the pioneer confreres’ work and saw that their efforts had born good fruits. I can imagine what kind of missionaries they were and I want to imitate them. The model of those two young SVD priests encourages me to dare to step out myself.”

Toub says that on weekends since arriving in the Philippines, he has accompanied SVD confreres on pastoral visits to remote areas with the minority Mangian tribespeople. He has also been learning the Tagalog language.

“Hopefully the coming novice program will be the first step for me to get a clearer understanding of the charism and mission of the SVD,” he says.

“This formation will be a special chance for me to focus my spirituality on God alone, while at the same time concentrating on the life of our founder saint, St Arnold Janssen, with St Joseph Freinademetz, the first SVD missionary.”