Hundreds of PNG pilgrims walk together to thank missionaries 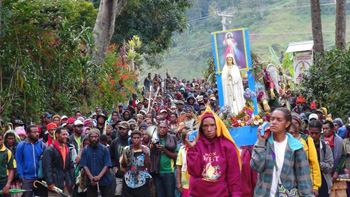 Actions speak louder than words in most of Papua New Guinea Culture. It is customary that when a person does something good, words do not express fully the appreciation. One has to reciprocate with actions. A common practice is the idea of saying thank you with action, rather than words. The Catholic Archdiocese of Mt Hagen recenty organised a special pilgrimage to say thank you for the 80 years of the Gospel in the Highlands.

This year is a special year for the Catholic Archdiocese of Mt Hagen, which includes both Jiwaka and Western Highlands. The Catholic Archdiocese of Mt Hagen is celebrating 80 years of the Catholic faith in the two provinces and also the rest of the Highlands. In 1934 the first Catholic SVD missionaries led by Frs William Ross and Alfonse Schafer, and Br Frank Eugene with 72 carriers from Rempi in Madang, entered the highlands region from the north. While Fr Schafer settled in Chimbu to evangelise, Fr Ross and Br Eugene moved on to the Western Highlands. 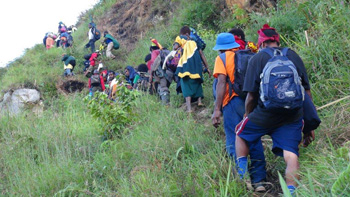 The first missionaries’ sole purpose was to evangelise the people but services like Education and Health seem necessary in order to evangelise meaningfully. Thus schools and health services were established. This has contributed a lot to the development of the region. And today about 40 per cent of the health and education services in the highlands are provided by the Catholic Church.

After 80 years, the Catholic faithful in the Archdiocese of Mt Hagen felt it was timely to say thank you and acknowledge all the blessings from God through the missionaries. An appropriate action of saying thank you was a pilgrimage from Madang to Mt Hagen, following the same route of the first missionaries.
About more than 500 strong Catholics including 3 local priests and 9 seminarians, travelled down to Madang on March 28. After two days in Rempi, north coast of Madang, the pilgrims travelled by PMV to Yakumbu along the Ramu to Madang highway to start their two weeks pilgrim on foot.

Sixteen young men from Rempi also joined the pilgrims, some were descendants of the 72 carriers of the first missionaries. The first week was a test of faith and physical strength also. They travelled from Yakumbu across the Ramu valley to Brahaman, a Catholic parish then continued up the rugged terrains of the Bismarck range to Bundi Catholic Mission, the last parish of the Madang Archdiocese. The pilgrims crossed through the steep ridges of the Bismarck and continued their journey on the western side of the Mt Whilem through Mondia Pass the border of Madang and Chimbu.

Travelling south along the Chimbu gorge, the pilgrims visited Denglagu, Golgme and the Ombondo parishes. They also had a chance to visit the memorial sites of two first missionaries Fr Carl Morschheuser at Womatne and Br Eugene Frank at Anganere, where the locals attacked and killed them respectively.

Leaving the Chimbu gorge at Ombondo parish, the pilgrims travelled west up the steep hills of the Gena mountains and arrived at Mingende, ending the first week of the pilgrimage. Physically most pilgrims had body aches and blisters on their feet but their spiritual strength motivated them to continue.

The second week of the pilgrimage from Mingende to Mt Hagen, following the old highway, was also the route that Fr Ross and Br Eugene took to travel to Mt Hagen. Continuing west along the Waghi valley, they passed Kerawagi the last parish of Kundiawa diocese, then on to Nondagul, Banz, Fatima parishes in the Jiwaka province and then entered Western Highlands, through Mun Parish in the Dei district. 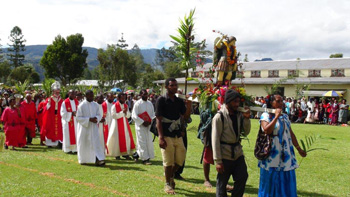 Finally on Palm Sunday, the pilgrimage ended at Rebiamul (pictured right), the Catholic Archdiocese Headquarters with many dropping tears of joy. The Archbishop of Mt Hagen, Archbishop Douglas Young, welcomed the pilgrims back and said, based on the theme of the Archdiocese, the pilgrimage was a sign of a family walking together and sharing the Gospel, as a Church alive in Christ.

Most of the pilgrims reflected that it was a perfect spiritual exercise to strengthen their Catholic faith during the Lenten season. And it was a good experience to feel the similar pain and sufferings of the first missionaries, 80 years ago to enter the highlands region.