Steve heads to US for novitiate, in a dream come true 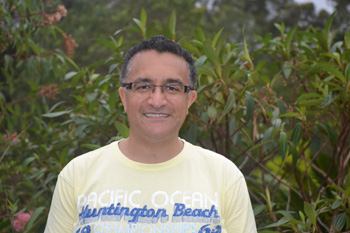 After living with the Divine Word Missionaries in Sydney and Melbourne as a postulant, Steve Desveaux is packing his bags to undertake the next step of his vocational journey in the United States, a situation he describes as literally a dream come true.

Steve will undertake the novitiate program in Techny, Chicago, and says he is really looking forward to the challenge.

“In January last year, when I first arrived at the SVD community in Marsfield, I had a very clear dream that I would be doing the novitiate in America,” he says.

“I could see it all very clearly in the dream, but then it seemed like it wouldn’t happen and it was more likely that I would end up doing it here in Australia or maybe in the Philippines, and either of those places would be fine.”

However, when the other two postulants that began with Steve ended up not staying in the Australian Province, it was deemed better to send him to Techny, where he will join other novices from across the US and around the world.

“So lo and behold, my dream ended up coming true,” he says.

Steve will be reviving a longstanding tradition for the AUS Province of the SVD. Many of the older missionaries undertook their novitiate at Techny, but in recent years that formation has taken place within the Province itself.

“I leave at the end of July, and I’m really looking forward to it,” he says.

Steve says the decision to seek entry to the novitiate at the end of his postulancy came very naturally.

“It just felt very natural, and very much like the next step for me.”

Steve, who has just celebrated his 50th birthday, worked as a Facilities Manager before joining the SVD postulancy program in January last year. He has a BA in Ministry, a Master of Theological Studies and a Master of Arts in Theology and says he has always felt a calling to religious life.

He spent his postulancy year living in the Marsfield community in Sydney, undertaking the program as set out by the then Postulancy Director, Fr Asaeli Raass SVD. It included time for recollection, retreats, spiritual reading, counselling and spiritual direction, as well as extra theology studies at the Catholic Institute of Sydney, undertaking some subjects necessary for ordination. There was also a focus on community life and exploring the charism of the Divine Word Missionaries.

“Part of my ministry last year was teaching English to teenage asylum seekers at Marist Youth Care,” he says. “I really enjoyed that.

“And this year I’ve been living at Dorish Maru College in Box Hill, Melbourne and working with adult refugees and asylum seekers at Baptcare. My work with them is really about being a presence for them, visiting them and having dinner with them every fortnight. It’s about listening to their stories and giving them a sense that somebody’s interested in what they’re going through.

“That has been challenging and enriching for me. I really felt God was a part of it, for sure.”

Steve says he has appreciated the ministry supervision, mentoring and spiritual direction he has been provided with during his discernment journey.

The novitiate year will provide a further period for structured pastoral work, spiritual development and discernment, leading towards the possibility of taking his first vows as a Divine Word Missionary.

“It will be a great opportunity,” he says. “Entering the novitiate feels like a natural step. It feels right. It feels God-ordained.”