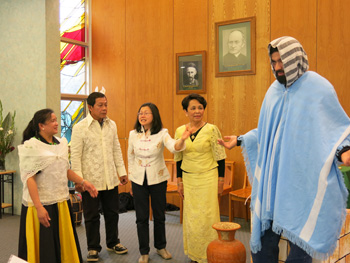 Bible Sunday was celebrated in spectacular fashion at the St Arnold Janssen Chapel at Marsfield, in Sydney, with a multicultural dramatic presentation of some of the key scenes from John’s Gospel.

Entitled ‘You are the Messiah’, the script for the drama was prepared by a parishioner, Tim Lee and Fr Michael Quang Nguyen SVD, taking their inspiration from episodes in passages from John 1-4.

He says the Bible Sunday dramatic presentation had a very multicultural flavour, representing the broad range of cultures embodied within the St Arnold Janssen Chapel community. 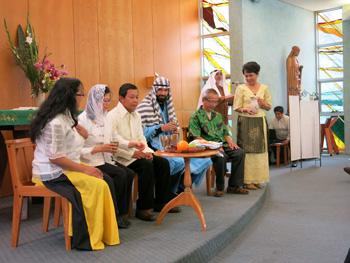 “Bible Sunday is a day where we focus on the significant role of the Gospel in our lives,” Fr Michael says.

“As Pope Francis urges, we want to continue to call the faithful to new evangelisation.

“So we came up with a drama where people can see and feel that Jesus is still the Messiah, in our modern context.”

Fr Michael says the actors for the play came from the Bible groups which meet at Marsfield, one on Sunday afternoons and one on Monday evenings.

“Instead of Bible period costumes, the actors put on their own cultural outfits,” he says. 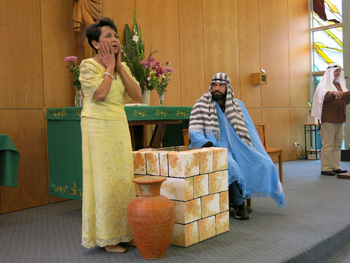 “So it is something rather outstanding, seeing all these well-known figures from the Bible wearing costumes from all around the world,” he says.

The play focused on the stories from John’s Gospel of the testimony of John the Baptist and the decision of Andrew and Peter to follow Jesus; the Wedding at Cana; Jesus encountering Nicodemus at Night; and the Woman at the Well.

The Bible Sunday dramatic presentation is one of several initiatives organised so far by The Word Centre.

Also running this year is a series of presentations on ‘Burning Issues in the Old Testament’, which have so far looked such topics as: The Cosmic Views in Genesis 1-2:1-4a; The Anthropology Revealed in Genesis 2:4b-25; and The Theology of the First Eleven Chapters in Genesis. Presentations still to come include: What caused Jonah to Run Away? (Friday, August 29); and The Ways to Happiness, Psalm 1 and its Literature (Friday, November 28).

The Arnold Janssen Chapel community will also celebrate Multicultural Sunday on August 31 with performances by different cultural groups, wearing their cultural costume, followed by a multicultural banquet prepared by parishioners.