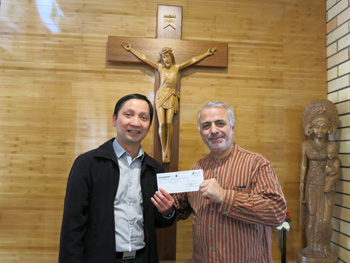 Vietnamese and parish communities in Sydney and Brisbane have reached out with compassion, by raising funds to help those who lost young family members in a tragic bus accident while en route to an SVD youth camp in Thailand.

Last month, In the Word reported that 13 young Vietnamese people had been killed on their way to a camp to be held at the SVD parish of Nong Bua Lamphu (NBL) in northern Thailand.

Fr Anthony Le Duc SVD and all the SVD confreres and diocesan colleagues in NBL immediately began doing whatever they could to respond to the tragedy, including communication with families of those killed and injured, assisting the authorities with identification of the victims, dealing with Thai immigration authorities and the Vietnamese Consulate, the media and church authorities. 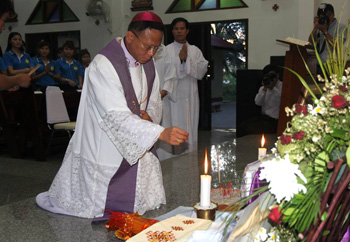 Friends of the SVD, and members of the Vietnamese communities in Sydney and Brisbane, were so touched by hearing of the accident that they immediately began raising funds for the families affected. Funds were also raised by the parishioners of Mary, Mother of the Church Parish, Macquarie Fields, and St Mark’s, Inala, both SVD parishes.

Rector of the SVD Marsfield community, Fr Viet Nguyen SVD, says the fundraising was a genuinely compassionate response to a terrible tragedy.

“We have received very generous funds from our Vietnamese friends in Sydney and Brisbane as well as from the broader parish communities of Marsfield, Inala and Macquarie Fields,” he says.

Fr Anthony Le Duc in Thailand says he was “deeply touched by the compassion extended to the victims and their families all over the world, including the people in Australia”.

“Their prayers and material support has been a great consolation for the families who have lost so much in this terrible tragedy,” he says.

“For some, the loss of their loved ones was so great that they felt as if they could not survive the ordeal. Yet, with the outpouring of kindness that has been shown to them, they are slowly receiving healing for their pains.”

Fr Anthony says the money raised from Australia will go to the fund that is helping families with all the expenses related to bringing the bodies of the deceased back to Vietnam from Thailand, funeral costs in Vietnam, and support the families who have lost important sources of income due to the loss of their loved ones.

The money contributed from Australia will also be used to help the small children whose young mothers and fathers died in the accident.

Middle: Bishop Joseph of Udon Thani Diocese in Thailand joins the prayers for those who died in the bus crash.