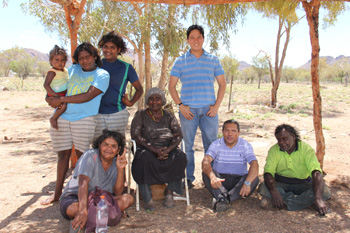 It’s a long way from Chicago to the dry red dust of Central Australia, but for SVD student Paul Aquino, the experience has opened up a whole new world to him and helped prepare him for his life as a Divine Word Missionary.

Paul is originally from the Philippines and is undergoing his SVD formation in Chicago. He came to the AUS Province for one year as part of the Overseas Training Program, a placement he has just completed.

He says his choice of the AUS Province was based on his desire to enter into a new and different culture.

“Because I am not American, I could have stayed and done my OTP in the States, but I saw this as an opportunity to experience another culture in another country,” he says.

Paul was assigned to the Central Australia District for his OTP pastoral experience and was based in Alice Springs.

“Alice Springs is a very multicultural town, consisting of Australians, Filipinos, Indians, Pacific Islanders, Americans and Africans too,” he says.

“I helped out in the parish by participating in Bible study, prison ministry, giving communion to the sick and old folks, and music ministry.

“I also went to a few Aboriginal communities where we held Masses, staying in their communities for a night or two, and those were the times that I was able to have a little chat with the indigenous people.” 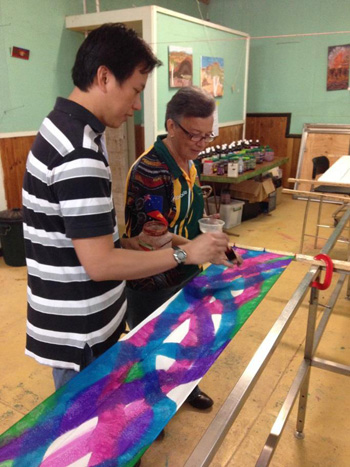 In November, Paul asked if he could spend some time in the Santa Teresa community, about 80km from Alice Springs.

“My request was granted and so I had the whole month of May to work closely with the parish community,” he says.

“The time I spent with the indigenous people really helped me to get to know them and experience their culture a little bit more, because I saw them every day and got to interact with them.”

Paul says he also helped out in the school by assisting the teachers in their classrooms and had the chance to spend time at the Spirituality Centre where the Aboriginal women create arts and crafts to be sold for supplementary income.

“One of the things that the women do is scarf painting, and so I was invited to try painting a scarf as a present for my mother at home in the Philippines,” he says.

“The outcome was not so bad for a beginner!”

Paul says his OTP experience has been varied and rewarding.

“I learnt many new skills regarding how to be an administrator of such a diverse community, which will be very helpful for my future ministry.”

Bottom: Paul being shown how to make a scarf during his time at Santa Teresa.