A journey of life and love of the Divine Word

By Fr Elmer I. Ibarra, SVD 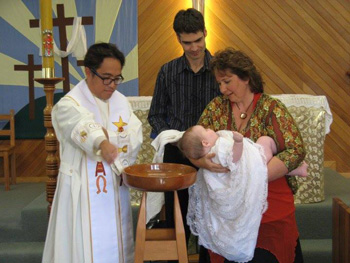 "'To live life to the full' - that has been my motto and is my driving force in continuously responding to God’s calling to me as a religious missionary priest of the Society of the Divine Word (SVD).

I was born in Manila on the 17th of May 1975 and my childhood was full of difficulties as I was diagnosed with Hirchsprung’s Disease (a congenital disease of the large intestine). At an early age, I considered the hospital as my second home. Because of this, I was inspired to take up nursing. So in 1996, I graduated and became a registered nurse.

However, after three years of working, I realised that I was called to another vocation and that is to serve God in his church as an SVD missionary priest. I entered the seminary in 1999. My first year in the seminary was quite tough, being away from home for the first time and studying Philosophy, which is very different from Nursing, presented a unique challenge for me. My novitiate year enhanced my spiritual life and I learned more about the Divine Word Missionaries by studying the Congregation’s history, its constitution and knowing more about the life of St Arnold Janssen, our founder.  After my Novitiate year I took my first vows of poverty, chastity and obedience on the second of June 2002, which I have really appreciated, despite of all the challenges that it presents. Then after my first vows, as part of the formation process, I underwent four years of Theological Studies, together with one year of regency, which meant going out of the seminary to work in an SVD parish in Surigao City, about one-and-a-half hours south of Manila by plane. This training experience, together with my theological studies, further deepened my love of God as I continued to train to become a religious missionary priest.

Then on February 3, 2007, with 12 classmates, I was ordained a priest by Cardinal Gaudencio Rosales, the then Archbishop of Manila, and I was assigned to the SVD Australia Province. For me, being assigned outside of the Philippines was the best decision that I had in my life. My assignment opened a new horizon to me as I experienced a new culture, new people and new environment. To be honest, it was never easy, but I have embraced with my whole heart this new mission and this new country as my mission assignment. 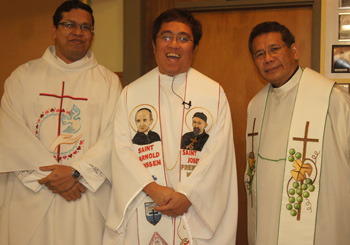 After a few months in Australia, the SVD provincial council assigned me to be assistant priest in St. Patrick’s Parish in Wainuiomata, a suburb of Wellington in New Zealand (SVD Australia province consists of three countries: Australia, New Zealand and Thailand). For quite some time I thought that I would be working as an assistant to Fr Joseph Vu and it was a very worthwhile experience. One of the most memorable works I did as an assistant was to assist our parish youth group to the World Youth Day in Sydney in 2008. That experience was really exhilarating. However, after a year into my work as an assistant, Fr Joseph was suddenly moved to Melbourne. I was asked to become parish priest and I accepted the challenge as I knew that I would become parish priest sooner or later - it just happened that it was just a bit sooner than I expected. Nevertheless, I accepted the challenge. And being parish priest was a huge learning curve for me but with the support of a lot of my parishioners, being a pastor to this multi-cultural parish was definitely worth it.

My journey has really been an adventure to me from Nursing to Seminary to Australia and New Zealand. And the beautiful part of it is that every day there’s something new for me. I honestly believe that with my new work as the Vocation Director of the Divine Word Missionaries I can further share my stories with everyone."