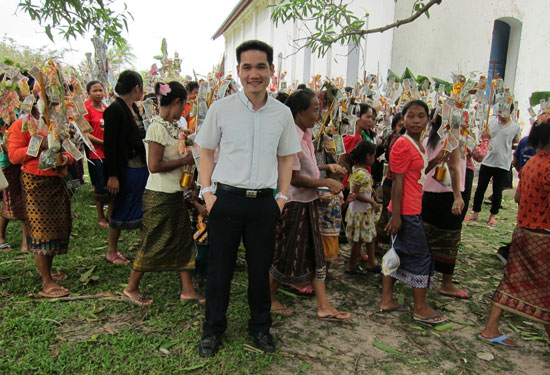 Some people ask me, “Why are you a religious?”

“Well, God called me to religious life,” I answer.

“That’s it?” They ask further.

They don’t seem satisfied with my response. They want to hear something more impressive, more dramatic than that. But I don’t have any story to satisfy their curiosity.

I have a rather ordinary life, with not a whole lot of things to record that might turn into a memoir, for example, the stories of children who are victims of war and violence who have managed to succeed in life, or orphans who were adopted and become famous political leaders.

I was born after the Vietnam War, the youngest child in an ordinary family. When I was young, I didn’t know hardship. If life was difficult, I don’t have memory of it. When I grew up, I heard my mom and brothers and sisters said that during that time, life was really tough. All I could do was listen because I couldn’t remember anything. In fact, my memories aren’t about not having enough food to eat or clothes to wear, but about times when I was playing with neighborhood friends, and my sister would call me home to eat what looked to me was a super sized bowl of rice. No matter how much I ate, it seemed to not be finished. I remember one time, I went to the neighbor’s house, they gave me rice mixed with casava for lunch. It tasted delicious. When I got home, I asked my mom, “Why is it that the neighbors get to have casava mixed in their rice, and we just have pure rice?” I didn’t know that casava was cheaper than rice.

My family wasn’t wealthy, but thanks to my dad who escaped Vietnam and settled in the United States after the Fall of Saigon in 1975, our situation was a bit better off than other families around us. But that was just afterward. Before getting news of my dad and starting to receive support from him, I heard that my brothers and sisters had to quit school and make a living selling cigarettes on the train. But I didn’t understand anything about that. I had it easy. All I had to do was go to school, play with the neighborhood kids, study catechism, and go to church. I remember the times I would wake up to go to church at four in the morning, walking and looking at the moon at the same time. The moon would follow alongside me like a faithful friend. Strangely, wherever I went, the moon was also there.
I followed my family to the United States through the sponsorship program. My life in the new country still only consisted of going to school, hanging out with friends, and going to church. Afterward, I began to join in church youth activities because there was the Fatima Youth Movement established at my parish. I studied hard. My family had high hopes for me, wanting a doctor in the family. I did not have a problem with that. If I were to become anything, becoming a doctor would be the best. You can help people, make money, and you’re also well respected by society. If that’s the case, then there’s nothing to think hard about. I was a high achiever. Ever since I was in first grade, I always ranked first or second in class. So going to medical school wouldn’t be out of my reach.

But in reality, I wasn’t really hung up on being a doctor, and I didn’t give much concern with social status. The one thing that I was interested in was participating in activities. At school, I joined in a lot of clubs, and also played on the tennis team. At church, I also was active in the youth group.

Sometimes, I also took part in social issues like joining in anti-abortion demonstrations and activities to promote environmental conservation. When I did these things, I felt happy. Life had meaning, and I was able to make use of my time wisely.

Perhaps through all these things, God was preparing my heart and mind for a greater mission, not to be a doctor or some kind of person in society, but a missionary. It began with the chaplain priest of the youth group giving me a book about vocation to the priesthood. It was just a thin book, but too deep. I read it but didn’t understand much. I gave up half way through the book. Then there were times when I had the opportunity to meet priests, brothers and sisters in various church activities. They talked to me and introduced me to religious vocation. They looked friendly, happy, poised and faithful. They sang well, spoke with a lot of charm, and shared their thoughts and feelings openly. I observed them and felt that I liked these qualities in a religious person. Then there was a priest friend of the family who came to visit and gave me a book on the life of Father Damien, who served the lepers on Molokai Island. I read his life story, and suddenly, it made me think about what my life could be like.

Would it be that I would not be a doctor who worked in a big hospital or some fancy clinic, but a doctor who goes to work in faraway countries, helping the poorest people in society, treating people that others are afraid to go near? Or that I would be a missionary who goes to a far off country, serving people who are marginalized and left out of society? These thoughts made me excited and motivated me to focus on being such a kind of doctor or a missionary. It seemed very compatible with my hopes and desires.

Since then, I began to give more thoughts to religious vocation, in particular missionary vocation. I entered university, still aiming for medical school and majoring in molecular and cell biology. I tried to take my studies seriously so that I could do well in my tests. I even took on a second major in Asian Studies, as this was an area of studies that I was interested in, and I felt it would also make my curriculum vitae more attractive. I also participated in extracurricular activities such as volunteering at the hospital and joining student clubs with the hope that my medical school application would have greater weight. But still, I continued to pray about my true vocation.

It was during my first year in university that I met a Divine Word Missionary priest. It was a meeting by chance, though there are many details to the story. Occasionally, he would come to visit me, driving hundreds, even thousands of miles to share about vocation. He never pressured me to enter the seminary. He just came to visit, asked about my studies, gave me some advice and answers to questions and concerns that I put to him.

The university that I attended was Berkeley. There, I had a lot of friends. At Berkeley, students learned hard and played equally hard. I had a normal college life like most of my friends. But there was one thing in my life, which many others did not have, and that was Sunday Mass. On Sunday evenings at ten o’clock, the church located near the university organized a mass specifically for students. In the day time, most students slept or had to catch up on their studies. So the time they were free was in the evening. This Mass was quite different from others. All the lights in the church were turned off. Instead, candles were placed in strategic places to add ambience inside the church. The church was always filled with people, but the atmosphere was very prayerful. I liked this Mass, and most of the time, I attended it alone. When Mass ended, I would walk back to my apartment. Sometimes, I would pray as I walked. Other times, I would quietly sing a hymn that I liked. Actually, it was not like I intended to sing, but oftentimes, the sentiments portrayed in these hymns would somehow surface from deep inside of me, and come out as music on my lips. Sometimes, I find myself singing, “God, please grant me a heart of love. No matter what bitterness I face in life, let me love only You, so that my life will not be desolate.” Lyrics from a Vietnamese hymn that became ingrained in my mind. And with these sentiments, tears unknowingly welled up in my eyes then rolled down the sides of my cheeks.

In this way, as time passed by, I found myself increasingly longing for a life more deeply connected to God, a life more committed to serving fellow human beings, and a life more adventurous and interesting than the everyday competitions in academics, the ordinariness of trying to make a living, or the meaninglessness of nights out at the bars and nightclubs.

That’s how I decided that I wanted to follow a missionary vocation, so that I could do something similar to what Fr. Damien had done. I gave up the idea of becoming a doctor. I graduated from college, then packed up my belongings to enter Divine Word Seminary, responding to God’s calling.

That’s it. There is nothing so dramatic. My life will never become a play for the stage, even if just a small one. If one asks why did I become a religious, the answer is, I became a religious because God called me, a calling that was gentle and unceasing. God did not strike me with lightning, or cast a wind sweeping me into religious life. He simply journeyed with me, much like the moon of my childhood, always following me every time I walked on the small village road that led me from home to church. He gently instilled thoughts in my mind through the gestures, words and actions of those around me. And he inspired me with desires and longings surging from deep within my heart that at times, seemed suffocating. And this way, the wide open road to the future for me became more narrow as I recognized a small path to turn into. That small path in turn became a wide boulevard leading me, a missionary, to the vast mission fields where I am serving today.

I am recording these memories during the time which I am serving in northeast Thailand, where the people are harvesting their rice crops. These rice fields never lack field hands. But as for the mission field, the words of Jesus were true in the past as they are true in the present. The harvests are plentiful, but the laborers are few.