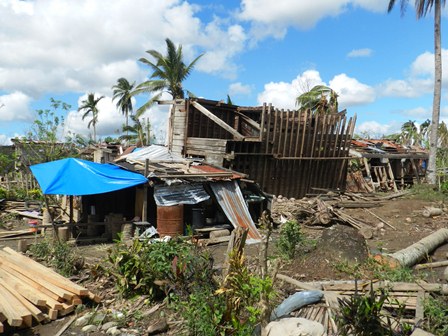 The generosity of donors has enabled the Mission Office of the SVD Australian Province to send much-needed funds to help the people of the Philippines who lost their houses, livelihoods and stock in Typhoon Bopha, which wreaked havoc in December.

Mission Secretary Fr Henry Adler SVD says that the Australian Mission Office has responded to two requests for help from the Divine Word Missionaries in the Philippines.

On December 4, 2012, Typhoon Bopha ripped through central Mindanao through Burkidon province, Cagayan de Oro and Illigan City.  Caritas Australia reports that the typhoon killed 647 people and hundreds of others were missing. Raging waters and mud from the mountains swept through school buildings, covered courts, town halls and health centres. More than five million people have been affected, with 70,000 homes damaged and 210,000 people displaced.

Fr Eugene Docoy SVD, who was involved in co-ordinating the SVD response to the disaster, says that in the parishes where Divine Word Missionaries work, the damage was enormous. Initial reports found that 5,490 families and 22,600 people were affected in those parishes. About 974 houses were totally destroyed and 7644 houses were partially damaged. Five people were confirmed dead with many missing. The value of damage to crops, infrastructure and livelihood was estimated to be about 3.2 million pesos, but was likely to rise.

In his request for help, Fr Eugene said that the SVD response would first focus on SVD run parishes and would include sending food, medicine and building materials.

Fr Eugene wrote to Fr Henry in early January to thank him for the response from the Australian Province Mission Office and give a report on how the funds were used.

“I would like to inform you that the first batch of relief operation in Agusan was very successful,” he wrote. It was well organized down to the parish level. We were able to distribute 75 tons of rice and a thousand boxes of canned goods and noodles. They were repacked into 10,000 packages delivered to five different parishes and communities. The people were very grateful.”

Fr Eugene said they were launching another operation, this time for building materials and restoration of livelihood. The Australian Mission Office responded with a second instalment of funds.

“For now, the people’s only means of survival are the relief goods distributed by the different charitable institutions and organizations,” he says. “So many people are practically left with nothing to live on. They have no houses and their farms and livelihoods are all destroyed. The recently concluded relief operation was only the first part of what we want to give to the people. Equally important are the provision of building materials and the distribution of replanting implements and livestock for raising.

“Fr Jingjong Rocha and the rest of the congregational leadership in the Philippine SVD Southern Province sincerely thanks each one, SVD confreres, volunteers and donors alike for your generous help. We will never know how deeply you have touched the hearts of typhoon victims and how grateful they could be.

“The fact is that we have journeyed with them in the most difficult moments of their lives. We hope that by reaching out to them they remain steadfast and hopeful for the future. God bless everyone!”