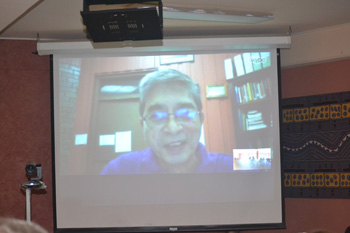 Internationality, or interculturality, is an essential element of the SVD charism, and a principal goal of mission should be the promotion of a truly multicultural Church, says former SVD Superior General, Fr Antonio Pernia.

Fr Antonio (Tony) made these points when addressing the SVD AUS Provincial Chapter held in Sydney this month.

Visa issues meant he was unable to join the Chapter in person, as planned, but instead he gave two addresses via Skype from Tagaytay City in the Philippines, where he is Dean of Studies at the Divine Word Institute of Mission Studies.

In his opening address, Fr Tony outlined the phenomenon of the globalised world and increasing migration, as well as the emergence of a World Church where Europe is no longer the exclusive centre and other centres are emerging in Latin America, Africa, Asia and Oceania.

“The multiculturality that characterises our world and Church today obviously impacts on our understanding and practice of mission,” he said.

Fr Tony said mission was no longer just a one-way movement from Christian Europe to the pagan world. Mission ad gentes increasingly needs to be understood as also mission inter gentes – a dialogue with people, an encounter between peoples, and finding a home among the people.

“With the massive movement of people today and the consequent multiculturality of the world, it follows that today missio ad gentes can no longer be identified exclusively with mission ad extra, (going out)” he said.

Fr Tony said that while ‘ad gentes’ stresses the cross-cultural nature of mission and evokes the picture of the missionary being sent to another people, ‘inter gentes’ underlines the fact that the missionary is sent in order to settle in and find a new home among the people.

“Just as the Divine Word pitched his tent among us, so also the missionary is expected to pitch his or her tent among the people he or she is sent to.”

Mission therefore, is no longer what it used to mean; that is, the white missionary who went to far-away lands in Africa, Asia and Latin America and lived among the natives, he said.

“Today, more and more missionaries originate from the South of the world. Europe is no longer the sole or even the primary source of missionaries,” he said.

“An indication of this is the Society of the Divine Word. In the SVD today, there are some 800 Asian missionaries working outside of their home countries in Europe, the US, Latin America, Africa and other parts of Asia. The Asia-Pacific Zone of the SVD has now become a primary source of missionaries.

“So, today we are called in a special way to respond to the missionary challenge of an increasingly multicultural world. And in this context, I believe a principal goal of mission should be the promotion of a truly multicultural Church.

“A truly multicultural Church is one which is characterised by three things; namely the Church as a home for people of different cultures; the Church as an instrument of the intercultural dialogue; and the Church as a sign of the all-inclusiveness of the Kingdom of God.”

In his second address to the Chapter, Fr Tony spoke on the centrality of internationality or interculturality in the charism of the SVD.

“It is my personal conviction that internationality or interculturality is an essential element of our SVD charism,” he said. “It is part and parcel of our DNA, a distinguishing feature of who we are, a constitutive element in our self-understanding.”

“What is our attitude towards diversity? What is our response to difference? How do we deal with the one who is culturally different from us?” he asked.

Fr Tony said the Christian ethos is an ethos of inclusion, of accepting those who are different from us, of welcoming the stranger or the foreigner.

“This can be seen in the ministry of Jesus, the mission of Paul, and the attitude of the early Church.”

As followers of Jesus, there is really no choice between exclusion or inclusion, he said.
“There is only one way – that of inclusion.

“We can only be grateful for the legacy of interculturality which the Founder has bequeathed to us. For it is what makes us truly missionaries of God’s Kingdom, where there are no strangers or foreigners, but only brothers and sisters.”

PHOTO: Fr Tony joined the Chapter on the big screen, via Skype