PNG sending missionaries out to Argentina 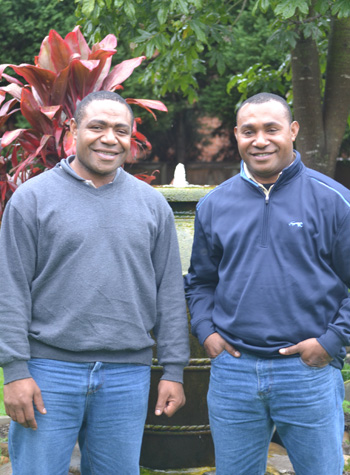 Papua New Guinea has long been home to Christian missionaries from all around the world, but now two young SVD missionaries from PNG are being sent out to Argentina – a development they say shows the growth and maturity of Christianity in their country.

Fr Vincent grew up in the highlands of PNG, but while he came from a Catholic family he was not baptised because the family kept moving from place to place. As he grew up he attended an evangelical church. It wasn’t until he was in college that he returned to Catholicism and decided to become a priest.

“I was inspired by an article I read in a magazine about a Divine Word Missionary working in Africa,” he says.

“I saw how they were working and I just got inspired. I wondered what in the world made these people leave their homeland, a place of comfort, to live with other people? And that was the beginning for me. I decided to become a Catholic, was baptised in 1998, and then I entered the seminary.”

Fr Vincent was ordained last August and has been working as assistant priest at a parish in the Highlands, an assignment that included chaplaincy work in local schools, hospitals and prisons.

He has now been assigned to the Argentina East Province and will begin work there in July.

“It will be an adventure,” he says. “I haven’t been there before, so I cannot speculate on what’s out there. But I know the people are mostly Catholic and live in a rural setting.

“It’s a place where the Catholic faith has been for some centuries and the faith has become a bit old and needs to be rekindled. So I’m looking forward to living life and sharing our faith with them.”

John grew up in a Catholic family in the PNG Highlands and credits the faith of his grandfather with inspiring him to become a missionary.

“I used to go with my grandfather to the mans’ house (a place for the men of the village to gather). He would wake me up very early in the morning and we would go up there at 5am. It was very cold at that hour in the Highlands and of course, the early hours of the morning are the sweetest time for sleeping.

“So I admired my grandfather and when he would receive Communion, I would be curious as a young boy and ask could I have it too. This was when I was about five years old.”

John was just in Grade 6 when he started contacting the SVDs. At the end of high school he sent letters to the Vocations Director, but they got misplaced and no reply came.

Feeling that missionary life must not be for him, John went to university to study mining engineering.

But two years later, out of the blue, a letter of invitation turned up from the local SVD Province. His letters had been found.

After some thought, John accepted the offer and joined the SVD seminary. He was drawn to the Overseas Training Program, and although not successful at first, he has now been accepted to become an OTP student in Argentina.

“I’m looking forward to the experience and to learning different languages,” he says. “I’m going with an open heart and mind to experience the life they live.”

Fr Vincent says their assignments show that the SVD in Papua New Guinea has gradually moved from receiving missionaries to also sending them to other countries.

“We are happy that the Church is maturing, not only the SVD, but other religious congregations too and that we are now sending missionaries overseas. I’m the 10th SVD priest assigned to another country.

“It’s a kind of sharing and I’m very grateful for that. I’m looking forward to contributing in whatever way possible to the work and mission of the Church.”