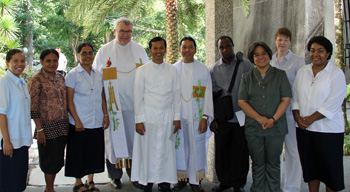 It was an occasion of great joy when Chanthavong (Toub) Anisong took his first vows as a Divine Word Missionary, becoming the first person from Laos ever to do so.

Toub, who is joining the SVD AUS Province, took his vows in the Philippines, where he has been in the Novitiate. He is due to arrive in Australia next month for further studies and formation.

He decided to join the Divine Word Missionaries after spending some time with the confreres of the Thai District and says the vows ceremony was an important day on his vocational journey. 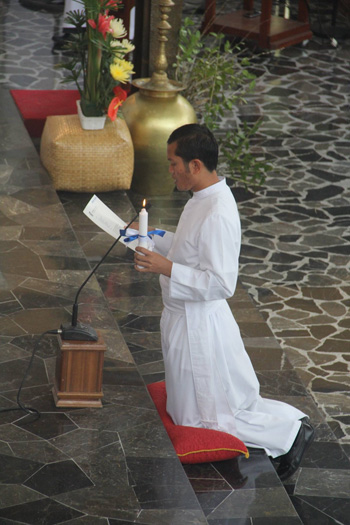 “I am very happy to profess my first vows into this community, because I am sure that God has called me out of His love to be apart in this Society, even though I am unworthy,” he says.

Toub says it was his own encounter with the love of God that made him want to become a missionary.

“As I have encountered and experienced the love of God, so I also want to share something with others through this international missionary society.”

He says he is looking forward to arriving in Australia in July, when he will undertake further English tuition before embarking on studies and formation through the Yarra Theological Union and Dorish Maru College at Box Hill.

“I am ready to put myself into this stage of my formation which is preparing me to become a missionary in the future, because His mission is our mission and His life is our lives,” he says.

Provincial, Fr Henry Adler SVD, attended Toub’s vows ceremony in the Philippines and says it was a wonderful occasion, with nine novices taking their vows.

“It was important for me to be there, because Toub is becoming a member of our Province and also because it was too far for his family to travel to be present, so my presence was a way of supporting him at this important time,” Fr Henry says.

“The novitiate in the Philippines has been a challenging time for Toub. It was his first significant experience of formation in an intercultural community, in a place that is very different from his own culture, and he did very well.

“We are looking forward to welcoming him to Australia for the next stage of his formation.”