From altar boy to party boy, then back into the loving arms of God 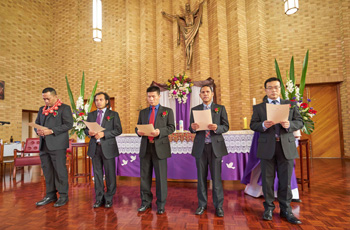 I grew up in a very remote island called Niuatoputapu, located at the Southern part of the Kingdom of Tonga. My dad was a catechist at my town community Church. I went to Morning Prayer and Mass every day. One of the reasons I attended Mass every day was because I wanted to sit with the priest as an altar boy and face everyone from the front. The priest had a huge impact and was a highly respected person in my culture. I felt so proud to sit next to the priest during the celebration of Mass, and that made me never miss any single Eucharist celebration in my small town. This made me think that I wanted to be a priest one day.

During my young days, the parish priest was a Marist missionary priest from England. Every time this foreign priest walked on the road or on his way to the shop, the kids, including me, ran to him. We wanted to have a chat with him in English, although our English was broken. The way we looked at this priest was as though he was famous. I said to myself: “One day I will be like that missionary priest. I will be famous like him in the eyes of God one day”.

By faithfully committing to my duties as an altar boy, my friends, relatives and people of my island said to me: “You are such a great child. We hope that one day you will make us proud”. 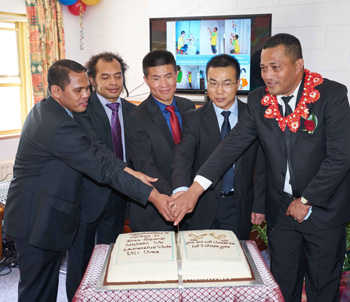 However, when I finished my study, my dream to become a priest or missionary one day had disappeared. I fell into the fun of being in the peer group. I enjoyed smoking, drinking and chasing around parties. Young people loved camping in my place because my parents and my siblings had moved out from my island and some had moved overseas to New Zealand, so I was the one to look after the house. My house became a house of violence. We stole others’ belongings and hurt others’ feelings. I was like a leader to all the youth. Darkness in my mind captured me so strongly. My relatives and people of my town said to me: “You are such a bad person. We wish you were never born to this world”. Their words didn’t mean anything to me.

My home is just 10 steps away from the Church of the Immaculate Conception of Mary in my home town. One day, on my birthday, we had a big party at my house. Many youth turned up and music blasted out loudly. At 6pm on that day, there was a Mass being celebrated at the Church, but the party was still going on. Everyone was drunk and there were lousy noises coming from my house which could be clearly heard in the Church. The catechist of that time approached me to turn the music down and lower our voices but I chased him away and followed him inside the Church during the Mass. I went in and I was yelling at the catechist and my voice was loud because I was drunk. The people in the Church were so angry and wanted to punish me but the priest called me and asked me to come to the front. I refused. He insisted that no one would hurt me and he kept on inviting me to the front. So I came to the front and the priest said to me, “You don’t mind if I ask you this?” Then he said, “I want you to look at the crucifixion of Christ, which is hanging at the front wall behind the altar. Can you tell me, what does the cross of Jesus mean do you?” I said, “I see nothing but just a sample of wood with a toy hanging to it.” Then I laughed and the priest said to me, “Well done. How about if I say this to you - Jesus died on the cross because of my sin? Could you repeat that saying?” I repeated the phrase. Then the priest asked if I could do it again and I said, “Sure, why not?” I repeated it again. The priest said to me, “Uili, could you repeat that one more time and I will never ask you again, but I want you to say it slowly.”

You know what? I could not finished that short phrase given to me. I managed only to get halfway: “Jesus died on the cross because….”. And I felt something so strong and new that pierced through my mind. That thing totally made my eyes open so much wider than anything I could ever have imagined in my life. I fell to the floor and asked for forgiveness from the priest. I asked forgiveness from the people too, and from God mostly. Every single word that phrase had given to me was so alive in me, and in that particular moment, my dream to become a missionary priest appeared again in my mind.

And now here I am. I joined the SVD in 2008 and I had a great experience of being a missionary when I was in the Philippines.

So, how do I see myself as an SVD missionary now? I feel that my dream has taken me higher than I could imagine. I have come so far and was so long in searching for my vocation, and now I have found that I have tasted the glimpse of what I had been dreaming for even when I was young. I believe that God had long called me, when I was not even born. And now, my friends, relatives and people of my town are now saying different things about me as a young SVD Missionary.

“I fully trust God and God’s amazing plan in my life. It is this God who has been protecting me and looking after me over the years. It is this God who sends me, Uili, from an unknown place (Tonga) to the people of the Philippines. This gives me mighty strength and courage to say YES to God for the rest of my life and leave the rest to God.”

Uili Uvea SVD made his final profession as a Divine Word Missionary earlier this year. His priestly ordination is planned for October. He has been assigned to be a missionary in The Philippines.

Photos: Top, Uili is pictured (far left) taking his Final Vows and, bottom, Uili (far right) celebrates with his SVD confreres who also took their Final Vows with him.

If you wish to enquire about life as a Divine Word Missionary, contact the Vocations Director, Fr Elmer Ibarra SVD, by clicking here.