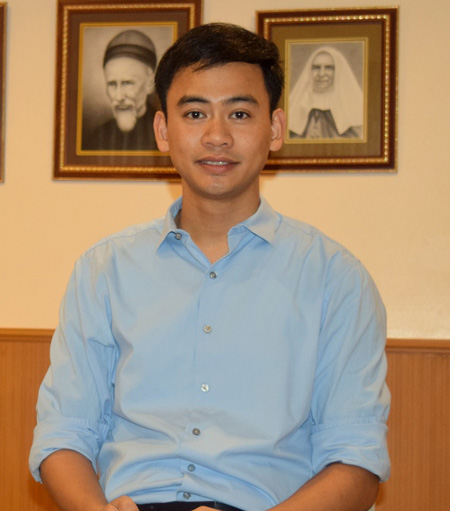 To mark the Year for Consecrated Life, Truong Le SVD shares his thoughts on the 'key' to his vocation.

“I am a sinner,” said the newly appointed Pope responding to his first interview. By the same token in introducing myself to the AUS province, I will take on Pope Francis’s words and proclaim that I too, first and foremost, am a sinner. To see me and to understand my physical, emotional, spiritual, and psychological make-up, one has to look through that lens. It is inseparable to my being. It took me 27 years to actually scratch the surface of that truth. Of course, three years of vows were momentous for my understanding.

I was born on October 16, 1987 and was born a sinner, as I am told. My parents were very Catholic; actually, the local community was even more so Catholic. Vietnamese Catholicism has greatly influenced my life from the very beginning and continued to take roots as I aged. Due to the repercussion of war, my family immigrated to the United States when I was 6 years of age in 1994; we settled in Charlotte, North Carolina. Being the youngest of eight, I thought I had it easy, but life in the US proved to be otherwise. Not only did I have to adapt to a new environment at a young age, but I had to live up to the American Dreams –those of my parents and older siblings. I studied hard, studied even harder into college. I ended up with a Bachelor of Science degree in Biology and with a minor in Chemistry. These were the best four years of my life. I experienced many successes along the way, yet these could not quench this deep yearning that I had. I had everything, but I was still missing something; something so big that it cannot be overlooked. Simply put: that’s how I became an SVD.

There was always something missing in life. Perhaps, it was the successes that reminded me of a deeper yearning for things beyond what I could see at the time. And through the failures, I was taught that I’m not as good as I thought I was. A little ego check goes a long way. So, do I see myself as a bad person? Of course not! I’m a sinner. Sin is not a list of the bad things I did that guarantee my place in hell; but rather, it shows my relationship with God. God has always been closely working in my life, placing a path before me. In knowing myself, I’ll always “miss the mark” with God. Somehow, though, God has ways to work through my weaknesses and failures to bring about something good. God’s grace, I believe, is more fully experienced in a sinner. I really do feel unworthy of the graces God has poured into my life. In fact, in that unworthiness, I am called to witness to God’s “overflowing and life-giving fountain of love” (AG 2). That’s how I understand my vocation –as a Christian and a religious missionary. That’s what I hear when Jesus says, “I did not come to call the righteous but sinners” (Mk 2:17).

Hope you all have a wonderful day.

Yours in the Divine Word,