Liezel’s story – “We are so blessed” 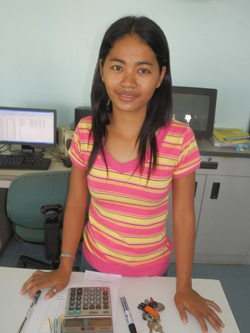 Twenty-six year old Liezel Casio spent her childhood living near a dumpsite, with her family scavenging to make a living. Today, thanks to an SVD mission project, she lives in newly built housing, is studying at university and says she is blessed.

The poverty of her childhood is still very much present, but Liezel can finally see some hope for a better life because of her education.

“I was born on May 26, 1986, the eldest of eight children, and we lived nearby the dumpsite, in Sitio-kawot Mactan Lapu-lapu City,” she says.

Liezel’s family ran a small business buying scrap material like cartons and bottles which had been dumped by a garbage truck at the dumpsite. But when the garbage dumping was transferred to a private dumpsite in another area, their family income was badly affected.

The owner of the private dumpsite hired people, including Liezel’s mother, to sift through the garbage for recyclables, but gave them a flat price for their items which is much lower than even the very low price they were able to achieve before.

“We had no choice to accept it,” Liezel says. “Because at that time there was a crisis and we had no food to eat.”

In the midst of this crisis, Lezel’s family were given a lifeline of hope four years ago when they were given a housing unit to live in at Janssen Mactan Lapu-lapu City through the SVD mission project called Justice, Peace and Integrity of Creation – Integrated Development Centre (JPIC-IDC).

Liezel has also been awarded a university scholarship under the program and says it is changing her life. She is studying Business Administration, majoring in Financial Management at the University of Cebu Lapu-lapu and Mandue.

“At first I wasn’t confident enough to apply because I’m not really that smart a person,” she says. “I was thinking that when you say ‘scholar’ you mean someone who’s smart and has confidence in themselves. And now I’m lucky. I’m one of these.”

As part of her scholarship, Liezel works in the offices of the JPIC-IDC for part of the day, before heading off to her studies.

“As a working scholar of JPIC-IDC, I am assigned to work here in our community from 8am to 2pm and after that I go to school and finish at 9.30pm, getting home at 11 in the evening,” she says.

“It’s not that easy, but I am so thankful to JPIC-IDC . I have learned lots of things here. I learned how to use a computer, I’ve talked with different people, I’ve become a leader for youth and I’ve been able to develop my self-confidence.

“The community gives me an allowance of Peso 3000 per month for my transportation to school as well.

“They have helped a lot of people living in different places, just like my family. We are so blessed to have this kind of house.”