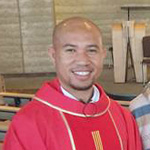 The Gospel on this 24th Sunday of Ordinary Time presents us with Jesus’ beautiful teaching on forgiveness and an encouragement for us to forgive one another, as God forgives all our wrongdoings.

In the Gospel, Peter really wanted to know what was Jesus’ teaching on forgiveness. Peter knew that in his Jewish religious teaching, they were obliged to forgive others up to three times. If someone hurt them more than three times, the offence was not to be forgiven. That’s why, based on this practice, Peter asked Jesus: how many times must I forgive my brother if he wrongs me? Peter then asked Jesus and added another four times to the Jewish religious practice, as many as seven times?

Peter was very surprised to hear Jesus’ answer: “I say to you, not seven times, but seventy-seven times”. Of course, this doesn’t mean that we count until 77 times and after that we don’t forgive anymore, but this means that we should forgive others an infinite number of times or without limit. Why? It is because God’s love and forgiveness to us is without limit. This Gospel story is about God’s love and forgiveness.

First of all, Jesus put the teaching on forgiveness in the context of the kingdom of God. In the parable, Jesus describes God as a King who decided to settle his accounts with his servants. They brought him a man who owed ten thousand talents. One talent is a large number of money. It’s difficult to make a meaningful comparison. In today’s currency probably one talent was worth $1000 dollars. So, 10,000 talents means $10 million. At that time, I am sure that no one had that amount of money. That’s why the master said ‘if he couldn’t meet the debt, he should be sold together with his wife and children and his possession’. But, he threw himself down at his master’s feet; 'give me time,' he said, 'and I will pay'. The master felt so sorry, let him go and cancelled the debt.

At this point, he was happy, he was so grateful. We can imagine if the bank cancelled our huge amount of debt, how happy we would be. That’s God’s generosity, love and compassion. It’s so unbelievable. God doesn’t count our sins at all. No matter how big or small our sins, God will forgive us as long as we ask for it. Therefore, in turn, we need also to forgive our fellow travellers with the same kind of unlimited love and forgiveness. The question for our reflections is: can we do it?

Jesus’ story also shows us the character of a wicked servant. Now this servant went out, and he met another servant who owed him 100 Denarii. He chokes him by the throat and says,'pay what you owe me!' That poor fellow does exactly what he did in his master’s feet; 'give me time and I will pay you', but he would not agree, he even put him into prison only because of the 100 Denarii debt of his brother. Remember that 100 Denarii was nothing compared to his debt. One Denarii was the equivalent of one day’s work for a labourer. It couldn’t match the $10 million we would say. How dare he treat his brother without any compassion at all. When the master heard of this, he was so angry and said “you are a wicked man, I take pity on you, but you don’t take pity on your fellow servant. Now, pay what you owe me!”

For us, the lesson is clear here. To be forgiven is to forgive others. When we pray the Our Father prayer, 'forgive us our sins as we forgive those who sins against us', it is clear that God’s forgiveness needs our responce and willingness to forgive others who hurt us as well. This is the challenge of being Christian: even, to forgive the unforgiving hurts in our lives. Jesus himself shows us the example: He forgives those who crucified and killed him! Therefore, we are encouraged to forgive. Pope Francis reminds us that we are not fully Christian if we cannot forgive. That’s it. That’s what being Christian all about. That’s our identity. We should be able to forgive, even to forgive the unforgivable matters.